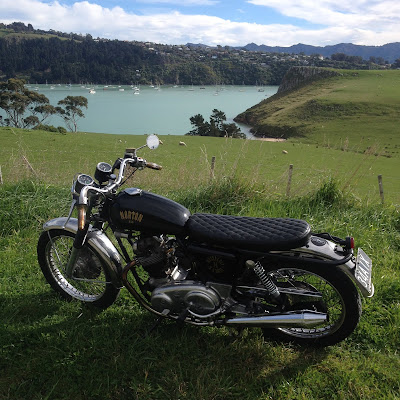 [Above: my bike above Purau Bay looking back over at Diamond Harbour]

To be honest I haven't even been thinking about this stupid blog for ages. I haven't even really been thinking about bikes much. I dunno if I've mentioned this here or not but we moved to Diamond Harbour last year. Which has been great. Mostly. Maybe I'll come back to that. Anyway the point I was going to make is that since moving out here and having quite a commute now to get to work, my bikes really have become 'work-horses' so to speak. Daily commuters. Daily riders. Which on one hand is cool, but on the other hand means that because I ride so much in the week now I don't get so excited by the idea of going for 'a ride' with the boys in the weekends. I'm also usually just trying to keep my bikes going, rather than giving a shit what they look like. And so I've been feeling like I don't have much interesting to say about motorcycling lately. Maybe that'll change again, I'm sure it will, but for now I'm sorta swamped in other things... 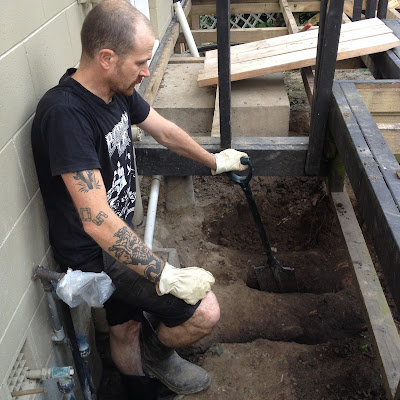 [Above: digging out under the deck behind our house in Diamond Harbour]

This fucking house! Moving out of the city was supposed to be relaxing. Well it has and hasn't been. It is beautiful over here as you can see from that photo up the top there. However we kinda really fucked up and bought a house on a hill that has no drainage. I mean literally NO drainage. No drains. I didn't even know what this meant until recently, but I sure do now. We had a proper legit building inspection done before we bought this place, but they somehow failed to point out that the house had serious storm-water leaking underneath, small under-runners basically, that had over time washed all the dirt away from around the piles. That's bad (just in case you don't know). Sooooo... discovering this, and the extent of it was somewhat demoralising and quickly took the shine off of our moving out of the city (although the city can totally get fucked regardless). Anyway, point being, with not much money left I had to figure out how to solve this fairly massive problem... which of course has meant doing most of the work, almost all of it actually, myself. So I've spent most of the summer digging. I've ripped up the large deck behind the house, dug and laid a feild drain 1.5m deep across the entire back of the section, dug out 1.5m deep behind the house to lay a drain there, dug out/removed the existing waste-water and sewer (which was leaking, probably since the earthquakes in 2011). I've built as retaining wall (thanks Joe!), put in sumps, new stormwater, waste water, connected everything up etc... but are currently waiting on good weather to waterproof (i.e. paint with bitumen sealer) the below ground section of the back of the house before we can put the final drain in there and back fill it all with tonnes and tonnes of gravel (which has to be wheelbarrowed up the hill by hand). 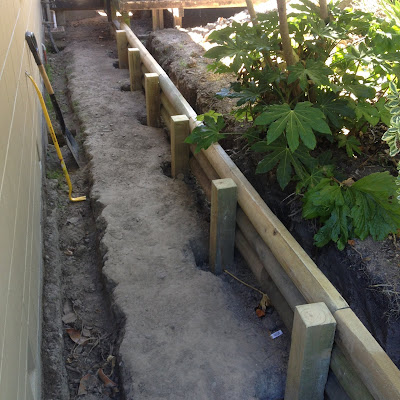 [Above: low retaining wall behind house, built mostly by Joe]

So yeah, asides from working my actual job, that's pretty much what I've been up to these last few months. Grim eh. Home ownership is for suckers. I miss renting and not giving a fuck. All I can see are problems around the house that need to be dealt with/fixed in the near future. Urgh. I do have a garage for the first time in my life though. That's cool. Although it's a total mess at the moment because of all the earthwork and drainlaying I've been doing. Oh, I've also been trying to chip away at building a band-room/recording studio at home... 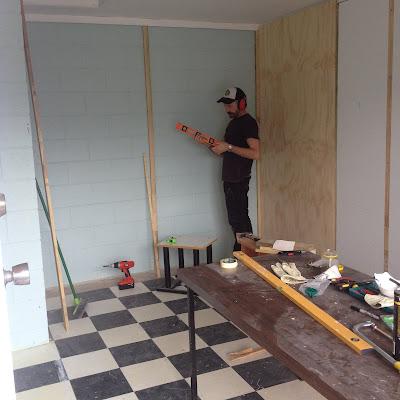 [Above: small basement room I'm trying to turn into a band-room/studio]

This was actually largely WHY we bought THIS house. There's a separate studio/sleep-out type structure up behind the house where I'd thought we'd have the band room. However Nadine's sister moved out here with us and she's been living out there. So anyway there's a much smaller basement room that is largely concrete block and half underground, and so seemingly much easier to (to some extent) soundproof. It was freezing cold down there though and also sounded terrible, so I started by insulating and relining this room just after Xmas. That's done now, and it's carpeted, and it's heaps warmer and it sounds a lot better. I kinda fucked up though because I'd assumed there was insulation in the ceiling, and there's not. And so now I'm about to cut out the ceiling and fill it with soundproofing as well. It feels kind never-ending too, like the drains. And I just desperately wanna make some noise. Late at night preferably. And I guess now, after all this work, I'm not even sure it's gonna be soundproof enough for that. I really need to have guitars feeding back at 3am if I'm gonna be happy about life ok. 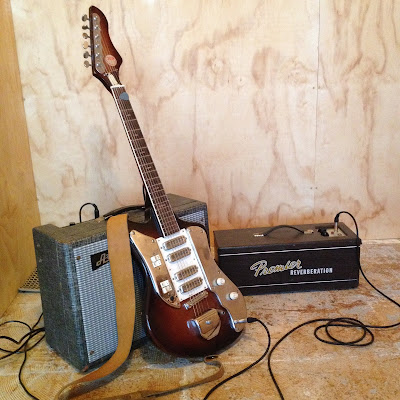 You can't tell of course, but this guitar here is droning away really good. In the bandroom, but just before the really expensive 70s reissue carpet got put in (which Nadine insisted on, I woulda put any old thing in to be honest). I was doing this to test how much sound was getting out, and trying to imagine how annoyed I'd be if I was one of our neighbours. It's hard for me to imagine though because I find a guitar feeding back to be just about the most beautiful sound in the world? Cool looking guitar though eh? I bought this off Greg 'Guitar Store' Leaman... who just constantly buys stuff and sells it on... mostly to me it seems. I bought a couple of guitars off him recently that I thought would be 'wall hangers', decoration really, but when I get them I always end up spending money getting them to play nicer and sound good, actually these sounded amazing – surprisingly enough – when I got them. Hence wanting to get them playable I guess. I actually played this one, the 'Hound Dog' at the last ever Hex Waves gig a couple of months back (I won't get into that here!).

I suppose I have been playing a lot of gigs. Well not heaps. But playing consistently I guess. 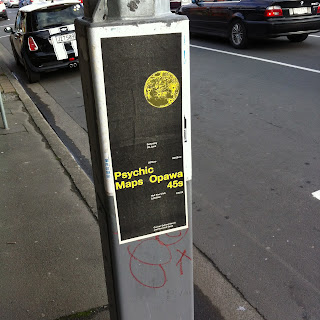 [Above: Poster for a gig we played last week. I liked this, not because of the way it looked, but because I designed the format to work on lamp-posts. No one really bothers putting up band posters anymore in Chch, mostly because you have to go through Phantom, and it costs, and it's not worth it. However I'd noticed no one was putting posters on lamp posts much. Not like they do in other cities. So anyway Lil 'Luke and I did a few runs of these suckers and I think it worked quite well. We didn't get in trouble, they were quiet 'visible', and they stayed up for ages.]

I've been playing mostly with Lil' Luke Shaw in/as The Opawa 45s, which has become a strangely schizophrenic sort of band, moving between slow lilting 50s instrumentals like Santo and Johnny's 'Sleepwalk', and then these long improvised 'jam' things, inspired I guess by things like early Velvet Underground, Spacemen 3, Jim Jarmusch's band Squrl, maybe a bit of Flying Saucer Attack. That sort of thing. Lil' Luke's doing his Hons at the moment and is research soundtracks/scores etc, so that's been a background to our move in this direction I suppose. We talk about guitars a lot. And amps. And effects... a bit. Trying to keep that last part in check. In fact I'm really liking the sound of my Gretsch straight into my new Vox AC30. Straight in. Pure tone. God listen to me! How embarrassingly dad rock or something.

Which reminds me – records. Making records. Another embarrassingly middle aged, middle class dude thing to do. Motorbikes, guitars, records, I'm a walking cliche. God it's so terrible isn't it. And yet I don't know what else to do. Or I don't see anything else worth doing, I guess is more to the point. I was going to talk about the records I'm working on at the moment here, but I can't be bothered and I think this has become very much long enough! What I was actually going to say here was that this is the stuff I want to be able to write about (thinking by writing). I know I've said it a few times in the history of this thing, but it was never supposed to be a motorcycle blog. It just turned into that. 'Head Full of Snakes' was something a started because it represented my state of mind, my anxiety about not being very good at staying focused, but somewhere where I could put all these things together and let the common threads between them emerge. Really only for my own purposes. And I guess I feel a little freer now because I can see that the blog's not getting the 'hits' it was when the magazine we started was getting so much press! That always made me feel like I had to just write about motorbikes here. But fuck that. And yes I've said that before. And yes I'm home sick and so have time for rants like this, but I thought I'd try and have a serious go at getting back to HFoS's roots over the next little while, and talk/write about some of this other shit that spirals around in my brain keeping me up at night and, no doubt, will one day kill me.