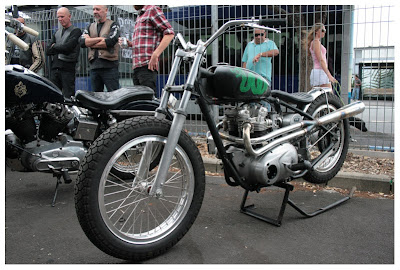 Sid's 750 Triumph is for sale! It fucking rules and you should buy it off Trademe here

Here's the info:
I built this bike about 1.5 years ago. It is a 1964 frame, with David Bird bolt on rigid rear section.
Harley Davidson Sportster forks.
1972 T120v bottom end with T140 barrels and head.
Later model MK2 Amal concentric carbs.
Brand new Joe Hunt magneto.
Belt primary drive.
Lightened timing gears and rocker shafts.
New chain and sprokets.
This bike goes really well, i have the altenator for it if you want to wire up a charging system and lights to get it on the road.
Posted by Luke Wood at 1:40 AM No comments: 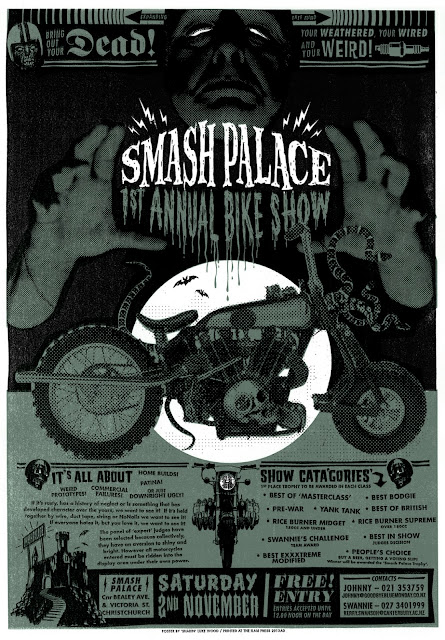 Poster I designed and printed for the upcoming motorcycle show at Smash Palace in November. Going to drop a bunch of these off at Smash Palace today, any of you who wants one should be able to get one from there. But I'm really hoping to get some bigger ones screenprinted too... although these bigger ones will be likely to cost a little bit...
Posted by Luke Wood at 2:03 PM 2 comments: 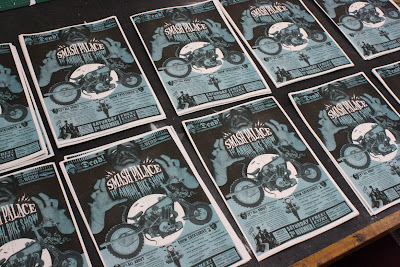 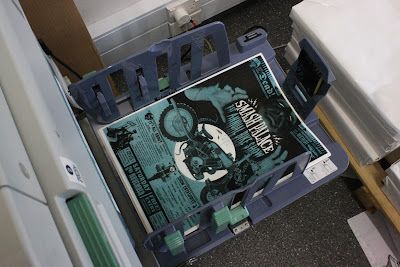 Finally printed the posters I'd designed for the 1st annual Smash Palace bike show on the risograph today. Really hoping to get some big ones screenprinted. Anyone know a cheap screenprinter? Might give it a whirl myself but retardedly fucking busy at the mo...
Posted by Luke Wood at 1:39 AM No comments:

How to read your next HFoS 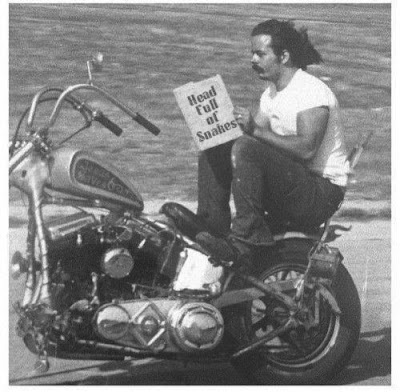 Email ThisBlogThis!Share to TwitterShare to FacebookShare to Pinterest
Labels: Books, Issue 3, The aesthetics of distribution


Epic Chick-Goth track by Chelsea Wolfe and band. Turn your speakers up – Ow!
Posted by Luke Wood at 9:35 PM No comments:

I stayed at mum's for a bit last week and dug out some old photos... this CB 175 was my first motorcycle, which I really only got cause I couldn't afford a car. Of course I became immediately obsessed with the whole thing, and spent a good couple of years riding this little thing way beyond it's abilities (meaning some quite long rides around the South Island)... 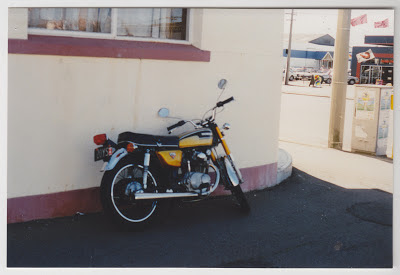 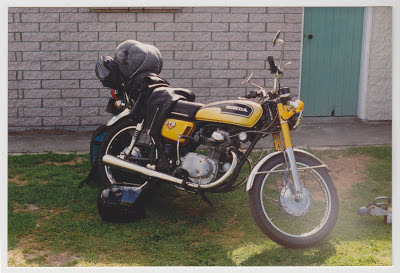 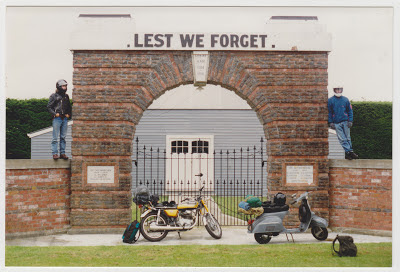 That's me on the left at about 17 I think. My friend, on the right, is David O'Keefe. Dave was a righteous chap who unfortunately caught meningitis and bloody died on a surfing trip in Aussie in the late '90s.

I quickly realised I needed a bigger bike, and although I really wanted something British – I'd already fallen in love with Triumphs, Nortons, and BSAs by this point mostly because I'd discovered 60s Rocker culture and cafe racers via various magazines – I couldn't afford a British bike. As a poor art school student at this point I bought the next best thing – a British racing green Honda CB 350. 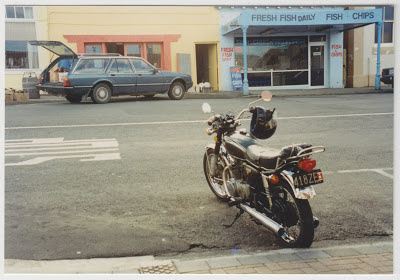 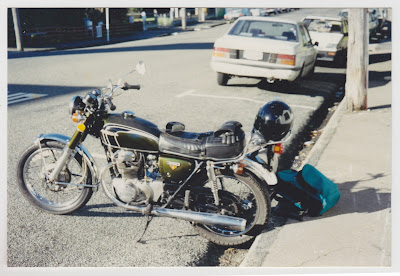 This turned out to be an awesome bike actually, and really quite fast for it's size. These photos were taken when I bought it, and while I modified it a bit (drag bars and chopped down seat) I don't seem to have any photos of it like that. I actually crashed this bike, rear-ending some car in the rain when they hit their brakes for an orange light. (Interestingly enough these photos were taken in Lyttelton, where I have now lived for a quite a bit, and where I used to 'hang around' as a teenage hoodlum. We liked coming over here to watch the bike gangs line up outside the British Hotel!)

My next bike was an odd choice for me really – a bit embarrassing now? although we're talking very early 1990s here and I was only 19 or 20 so gimme a break – also, at the time, it was almost new and cost quite a bit. I put it entirely on my student loan (which had just been introduced by the government) as they didn't seem to care what you spent the money on (I also bought a ridiculously huge guitar amp and took a trip to Spain with my girlfriend!). 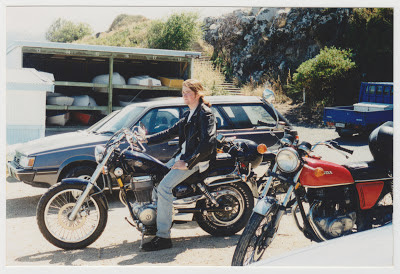 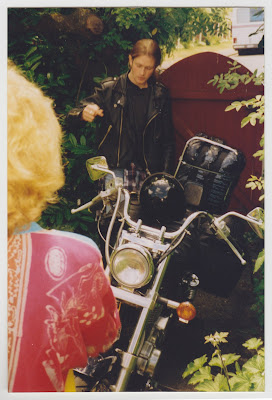 Dig my flowing locks? My girlfriend (Silvia Rico Lozano) and I rode this around around NZ one summer fully loaded with tent, sleeping bags, and all sorts of shit tied on. This last photo is of me just before leaving town, must have been '93 or '94.

Shortly after this my cousin, Matthew Woodley, got killed on his motorcycle. He was hit head on by a 15 year old drunk driver with no license. My parents pretty much made me get rid of the bike then and offered me a bunch of cash to buy a car. I bought a Holden Kingswood, which I then obsessed over for the next few years and blew thousands of dollars on! I didn't get another bike until about a decade later, and even then I kept it a secret from my parents for a while...
Posted by Luke Wood at 3:31 PM 3 comments: 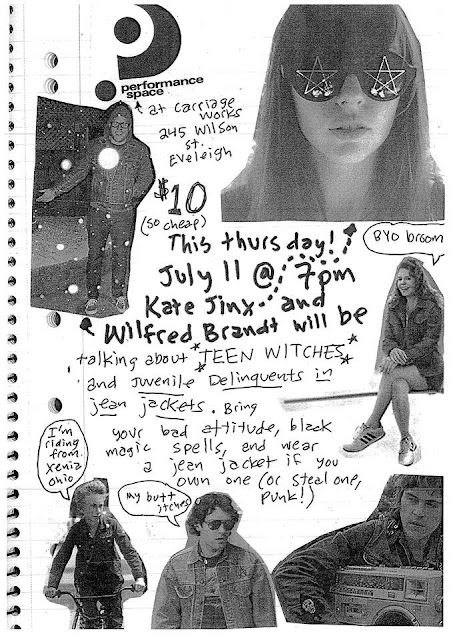 Two things we all love! If you're in Sydney you should go to this for sure. Wilfred was a contributor to HFoS #2 and he obviously knows a thing or two about denim...

From the FB page here:

"Kate Jinx and Wilfred Brandt examine some the more unconventional tropes of Hollywood in this cinematic dissection of adolescence. Wilfred will discuss the history of jean jackets, the birth of the teenager, and the Juvenile Delinquent film and the romanticisation of misspent youth in his ‘JDs in Jean Jackets’ lecture.

A paranormal parallel will be provided by Kate Jinx as she traces the life-cycle of the Teen Witch and teases out its strange comparisons to her own adolescence, in this performance lecture which is part of a greater body of work on the four-corners of cinema."
Posted by Luke Wood at 8:53 PM No comments:


Oh my god this shit rules my world tonight. I know I'm expanding my motorcycle rock and roll genre a little here... actually not too much considering my inclusion of Dirty Beaches a while back... but wow! This popped up while I was researching for the Goth/Psychedelic band Nadz and I are starting with Ella. The band is called Tropic of Cancer and they're from LA (so much good shit coming from the West Coast USA at the moment!?). Tropic of Cancer is actually a solo project of one Camella Lobo (whom I presume is playing synth/keys and singing in this). Taylor Burch is playing the guitar parts. There's a decent looking interview here which I'm gonna read tomorrow. In the meantime I'm downloading some of this to listen to in bed and imagine riding through the mountains on a cold winter night...
Posted by Luke Wood at 4:48 AM No comments:

I know this video is fucking everywhere at the moment, but fuck it Max Schaaf is a pretty fucking choice guy and as much as I thought I always hated Harleys I have to admit I'm really digging his bikes.

Watching this Born Free flick made me revisit this interview he did a while back for Slap Magazine (Max is an ex-pro skater), thought I'd stash links to 'em here (I'm not including the middle one though cause it's just about shoes):