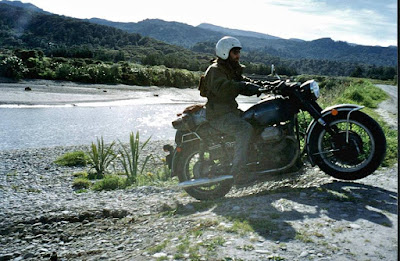 Last week one of our contributors passed away. A real gem of a man, Lionel Newbery, or 'Duc' as many people called him, contributed fragments and memories of his ride around the world back in the late '70s to issues #2 and #3 of Head Full of Snakes under the title 'Not Safe'. That's Lionel above on his 1974 Moto Guzzi GT850, the bike he rode from London back to NZ. He still had this bike and it was great to see it again, sitting out the back of his house at his funeral/tangi last Thursday. His kids told me that they plan to do the ol' Guzzi up too, in Lionel's memory.

Last Thursday was amazing and seemed a really fitting send off for someone who was so sort of quietly influential in quite a few peoples lives. Lionel had a large and really loving family, and he was also well known to the locals over in Lyttelton where he lived. It was actually seeing Lionel riding his old red Ducati (below) around Lyttelton back in the very early 2000s that made me get back into motorcycles (having since sold my bike after my cousin died on one). I loved the look and sound of Lionel's Ducati, and he'd often be parked up outside No.6, one of the old cafes that was run by Bruce Russell and his wife Kate back then. 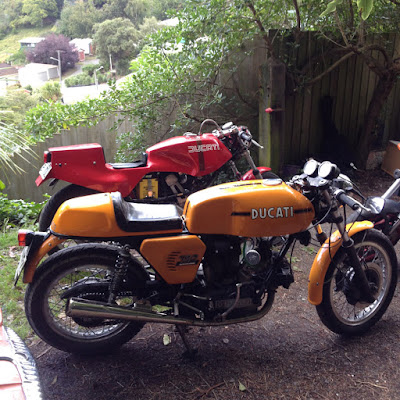 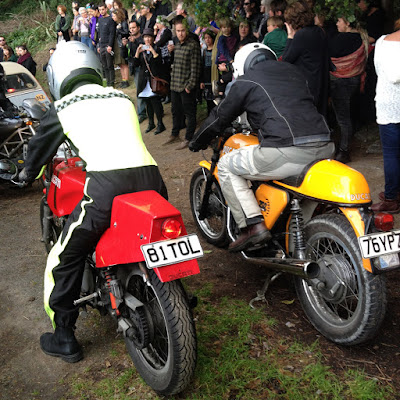 Lionel had shown me photos of his old Ducati GT 750 that he'd bought brand new and raced, but I'd never seen it in the flesh. Turns out his brother had it up in Auckland, and so he rode it back down all the way to Lyttelton for the funeral! I think it bought a tear to many people's eyes when Lionel's son (on the red bike) and his brother (on the GT) started up both bikes to lead a procession of motorcycles over to the Diamond Harbour cemetery. Lionel went in the old Citroen you can just see in front of the motorbikes there.

I thought it would be a slow sombre ride around the bays, but no! These two on the Ducatis took off and this would easily be one of the fastest most hair-raising group rides I've been on. A fitting tribute as everyone agreed, 'that's how Lionel would have ridden'.

The ceremony was beautiful with no involvement from any weird outside participants who didn't know Lionel. The family filled the grave with shovels, everyone got real dirty. There were no speeches, but there were a couple of songs. It was really moving and special.

Here's to you Lionel, and long may the Guzzi run.

Was cleaning off my desktop and thought I'd put THIS up on here. It's an article by Vicki Anderson which uses interviews with me, Chris (of QCR), Paddy Snowden and Kerry Swanson. It was done around the time of the last Smash Palace Motorcycle Show. I sorta talked about what I liked about motorbikes and how I got interested in them from when I was a kid. I dunno, it seems relevant?
Posted by Luke Wood at 5:39 PM 1 comment:

Email ThisBlogThis!Share to TwitterShare to FacebookShare to Pinterest
Labels: Archive

Ok so it's been a while eh. What the fuck's going on? Well, heaps actually. I guess I just haven't been bothered with this particular forum or whatever you call it. I've been thinking about that lately – this particular forum or whatever you want to call it – and the whole Head Full of Snakes publication offshoot, motorcycles, the culture(s) around them, etc. But let's back up a little. 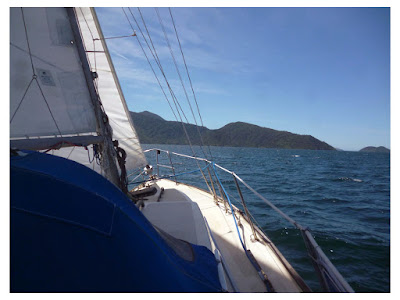 A month or so ago I went fucking sailing. I'd done a little bit of sailing years ago as a kid and then I worked on boats in Spain in the 90s and thought I was right fuckin over boats. Mostly cause it was all rich folk and whatnot, especially the Spain experience. But this – this [above] – this was fucking awesome. The ultimate in antisocial activities... antisocial apart from those on the boat with you of course, although secretly thinking; hey if I could learn to do it myself I literally could be out there on my own. Yeah. Relaxing.

I did ride up (to Picton) but the ride was awful. That road (Lewis Pass) is totally fucked now that it's the only road that connects north and south (due to the Kaikoura Rd. getting totally destroyed by quakes late last year). They've made heaps of parts of the road 80kph, there's roadworks every few minutes, and endless lines of cars following endless lines of trucks at about 40–50kph. There's also – of course – cops. Heaps of them. Like flies on shit I guess. I got a fine for 'dangerous passing' even though I didn't cross a yellow line and never broke the speed limit. Apparently there's some rule about having 100 meters clear ahead of you no matter what speed the traffic is moving (or NOT moving) at. Fuck it. I took some photos on the bike but they're mostly pretty shit cause like I said it's all lines of cars and roadworks. Fuckin lame. Here's one for context... 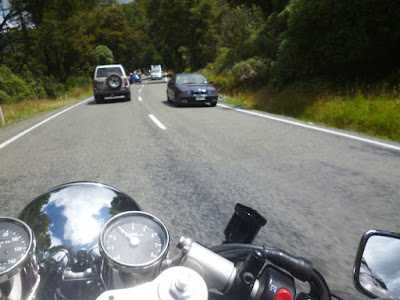 See. Fucked eh!? It was like this for nearly eight hours. Made me think about selling a bike and using the money as a downpayment on a yacht – a 30'ish foot keeler like we went away on. Hamish (who took us) said he could take me out some more and learn me real good.

Anyway the holidays were basically over at that point and I was terrified of going teaching again. I wished I could retire already. I felt like I was losing interest in everything... design, school, art... motorcycles... everything except music actually. Been playing guitar a lot. I might start talking about music more on here? Maybe that's a plan. HFoS wasn't ever supposed to be just about motorbikes anyway. Not originally.

Here's a guitar I bought in LA when we were there at Xmas time: 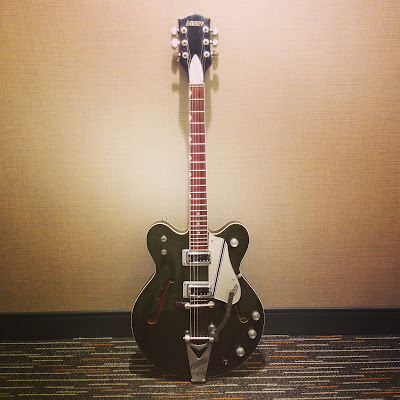 It's a 1967 Gretsch Rally. It's a little beat up, which I like. It wasn't really what I was supposed to be getting. I was really planning to buy either something old and CHEAP, like an old '50s Silvertone or something, OR get a new Gibson SG or something like that. Problem is that once I played this particular guitar I just sorta couldn't stop thinking about it.

Apart from guitars the other thing I thought about a lot as Nadine and I drove around the desert (California, Nevada, and Arizona) was trying to be less stressed out this year. And one of the things I kept coming back to was how I always end up involved in 'serial' publications – projects that once started are very hard to stop/end/pull out of. Obviously Head Full of Snakes is one of these, as was The National Grid, and Cheap Thrills (the most recent one I'd become involved in). 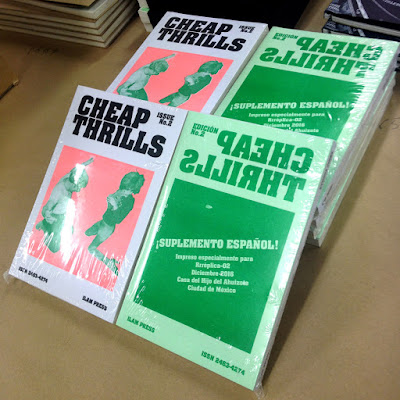 I'd taken the newest issue of Cheap Thrills to launch at a sort of book/zine fair in Mexico City. While I appreciated this, the invitation I mean, I struggled to enjoy being there because I was fucking burnt-out... by having made the thing, and just by having had a generally shitty year. (I know this is getting a bit personal, but stick with me I'm going somewhere with this... I think?) So post-Mexico driving round California with Nadine I made the decision to not do Cheap Thrills anymore. Big decision actually, cause mostly I really like this publication and I think something like it should certainly exist in NZ. Maybe it will carry on, I'm not sure? That'll depend on Erin, the other (main) editor.

Which brings me to Head Full of Snakes. Because really what I thought was that I should STOP doing serial publications, rediscover some sense of enthusiasm (which you need to do stupid shit like make magazines/books/music/culture/the-stuff-that-makes-life-worth-living), and focus on maybe just making the occasional one-off book? One of the big problems that I've discovered with the serial is that everyone's interested in the first and maybe second issue, and then people sort of lose interest from there on in. Head Full of Snakes sold out the first issue in only a couple of weeks. The second issue a couple of months or more. The third issue hasn't sold out yet (two years later), and the fourth issue hasn't really sold very well at all so far. To be fair we were probably better at sending out review copies and stuff like that early on, so it's our enthusiasm in question here too, not just yours.

Head Full of Snakes was fun (and traumatic) when me and Stuart would get together and make it in a sort of whirlwind. There was a kind of satisfying madness to the whole thing. Like it all sort of flew in the face of the horrific realities of the neoliberal world we live in. But... the last issue we didn't make together. And I didn't really like it. And maybe that's why it's not selling so great? Maybe you can tell that it wasn't made with that same sense of mad love? Can that kind if wild romance ever be rekindled???

Hence my feeling like one-offs might be the future? You get the enthusiasm, release the energy, and it's done. If I even keep making books/magazines/publications at all? Funnily enough the last page in Cheap Thrills was a sort of pseudo-ad for something that was really just a joke... 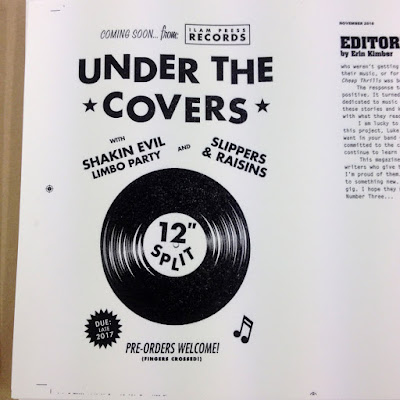 A joke which really got me thinking that maybe Ilam Press COULD run as a small record label? Which got me thinking that maybe making records (and associated graphic ephemera) would be a good break (departure) from making books? Aaron would still make books obviously, but I could start the record label part? (I should point out here that have ZERO interest in making another book for an artist or an art gallery... I want to get as far away from that as I possibly can, and I'm totally sick of working as an artists PR tool. I hope that time of my life is unequivocally over.) I'm possibly (probably!) romanticising the record label thing, but for now that seems interesting anyway and I feel like I'd rather work with musicians than artists.

But Head Full of Snakes you ask? Good question. I really need to talk to Stuart obviously. I feel like we should at least make one more, and if it's going to be the last issue we should call it that and do it right, send it off with some bells and whistles and fireworks and burn-outs or something. Not just let it fade away. I know there's people have some content sitting there waiting for us to make another issue and it'd be good to see that out.

Or... maybe that's just how I'm feeling right now and things will change and we'll get right back into it?