I tried to put this up here ages ago, prior to issue #1 coming out, but it didn't wanna work for some reason. Anyway here it is now. This is the song that Paul Elliman 'translates' for us on the flexidisc that comes with issue #1. It's a great song... about a great bike... by a great guitar player.
Posted by Luke Wood at 5:06 PM No comments: 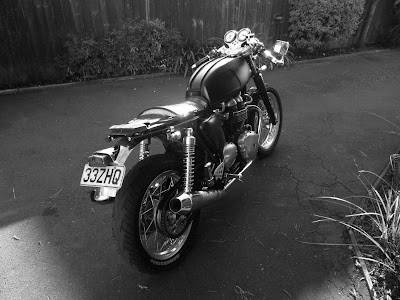 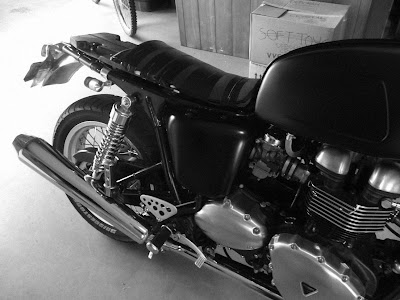 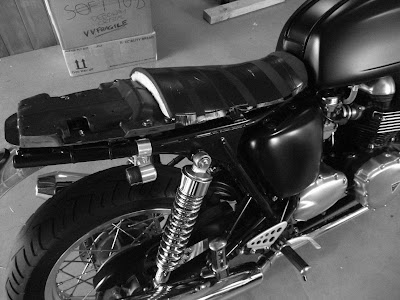 Electrical tape and foam rubber!
Posted by Luke Wood at 2:08 PM No comments:

Just watched this on Youtube. Quite sort of depressing actually, but very interesting none-the-less. Ive read about about Norton and its coming to an end, but hadn't read much further into the demise of Triumph. I was very interested in that it became a workers cooperative, but this doco shows up, superficially, some of the flaws in that. There's also an interesting bit near the end at the new factory where one old chap talks about not wanting to get work done, or parts made, elsewhere. It's a really good illustration of that old (post war) attitude towards foreign production. It was rife here in NZ as well. I was reading an old issue of 'Twin Eagle' from the mid 1990s a couple of weeks back and there was a guy writing, very proudly, about how nothing in his house was 'made in Japan'. Funny how something so specific to a particular point in time can have hung around so long. It reminded me a bit of Sid's posters for the Born Too Late chopper show, how they have 'No Jap shit' on them. But it's not like it used to be. It's a pastiche these days, because the strength and relevance of that original sentiment has faded away. Which brings me around to the new Triumphs from the Hinckley factory, with their Mikuni carbs and whatever else. It's strange, I think, that some people deny these as being 'genuine' or authentic or whatever. Again that's a nostalgic sentiment from another world that's been passed down to us from our grandfathers. It's not real anymore, and no one cares. It's just xenophobia and racism these days I think? It's what lead to Triumphs' demise in the first place.
Posted by Luke Wood at 3:44 PM No comments: 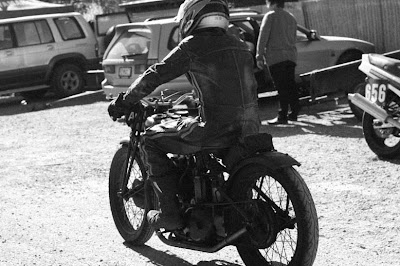 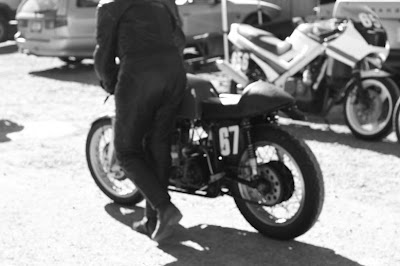 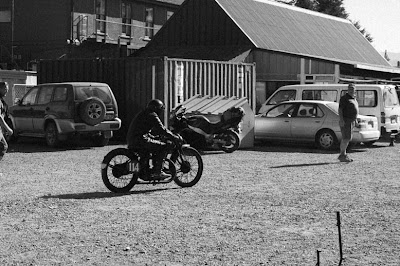 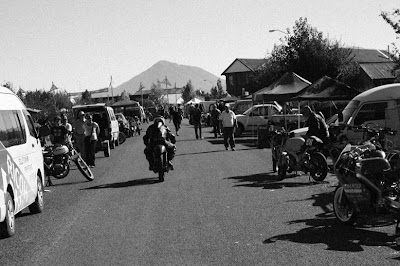 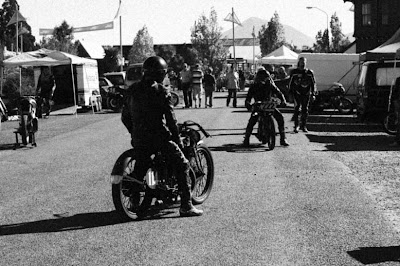 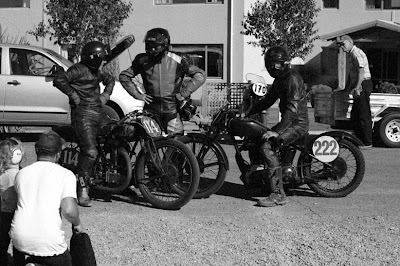 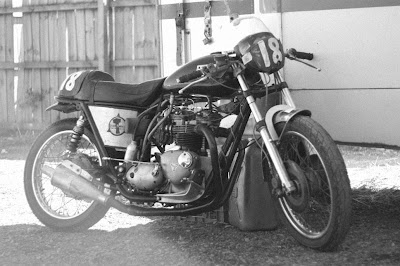 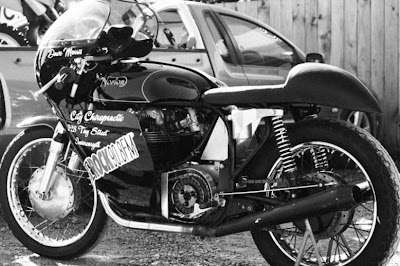 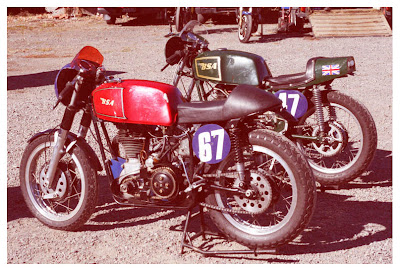 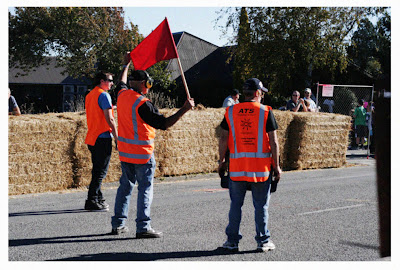 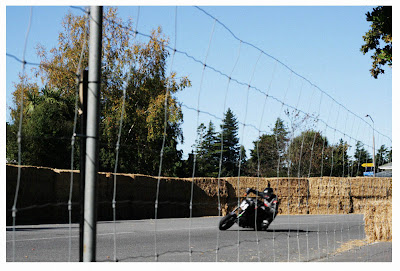 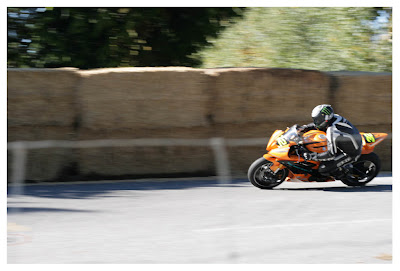 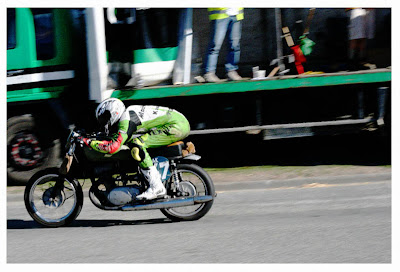 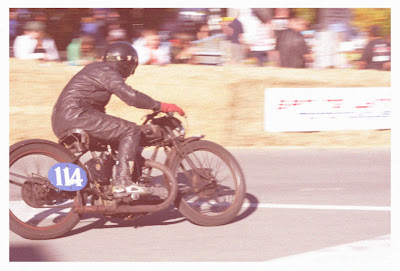 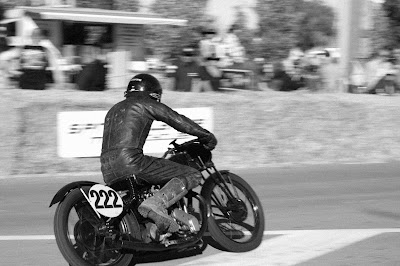 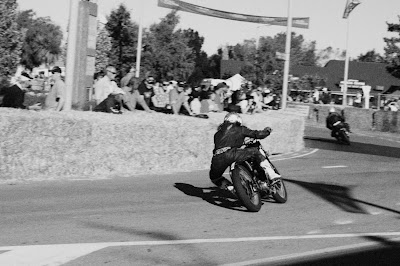 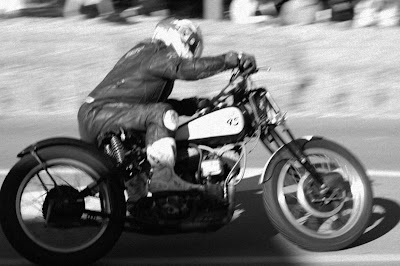 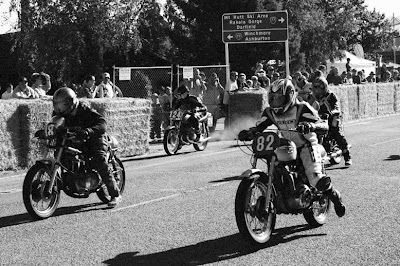 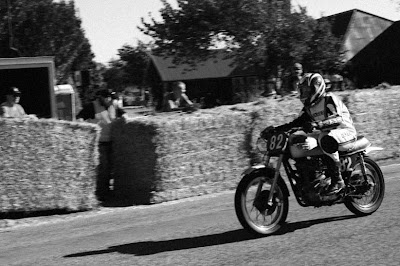 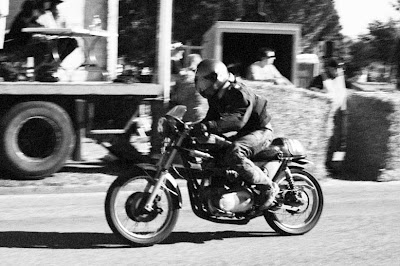 Street racing in Methven, the annual 'Mountain Thunder' event. Really great place to watch street racing, definitely prefer it to Greymouth although it's a smaller circuit and not as fast. Good to see Paddy's Indian racing after having had it in our first issue. A young chick called Scout was racing it and really thrashing it. Great to see! The last pre 63 race saw an awesome battle between old man Ormsby and the guy on the #18 Triumph (who's name I can remember but will track down and chuck in here). Dan Ormsby was kicking ass on #32 in the Formula Methven... family day out! Phil from Street and Sport was doing the commentating and called me over for an interview over the PA system. That was hoot, a bit of free publicity! Cheers Phil.
Posted by Luke Wood at 2:23 AM No comments:

Email ThisBlogThis!Share to TwitterShare to FacebookShare to Pinterest
Labels: Racing 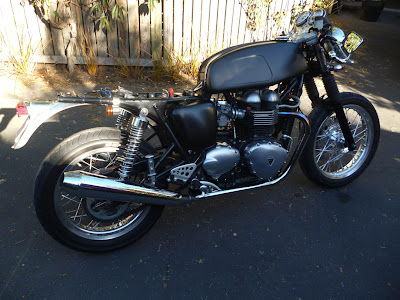 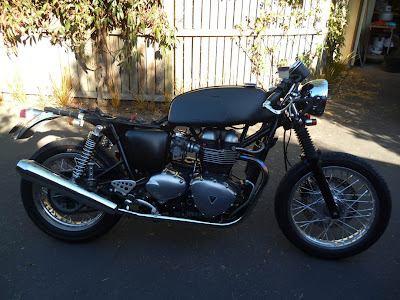 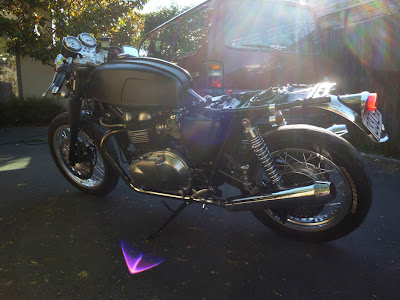 New petrol tank is now fitted, apart from a balance pipe I need to make up and a couple of sleeves for the front mounts. Also gotta extend some wiring on the loom. Had Marty paint the tank and side covers matte black after much procrastination about colours. I'd like to do the tank a kandy red in the future maybe, but doin it black for now. Will hand-paint logos on tank and side covers, but will wait til I get it running and know everythings ok. I'm a little worried about the flow rate from the tank. The old (original) one had a breather pipe and this one just breathes through the cap, old school style.

I really gotta get my head around the seat now. The mounts for the seat are doing my head in a bit. I've cut so much off the seat the base is really weak and I will end up crushing wires and the CDI unit if I don't get it sorted.

Every weekend since I've pulled this bike off the road has been amazing... hoping the weather holds for when she's back on the road!
Posted by Luke Wood at 12:45 AM 1 comment: 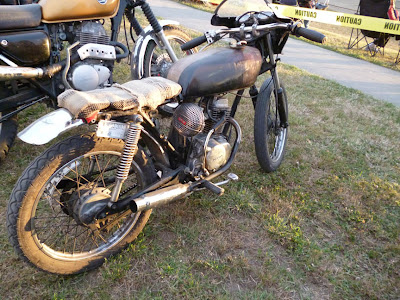 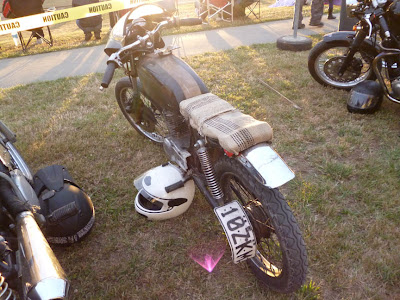 In lieu of not having got much further with either of my bikes this weekend I thought I'd put this sucker up here. This is Johnny Moore's CB50. One of the coolest rides on the road in Chch right now. He took this bike on the HFoS launch run to Lyttelton, but these photos are from a trip to the speedway a bit before that. This bike actually featured in HFoS issue #1 but has been more modified by the time you see it here...
Posted by Luke Wood at 1:58 AM No comments: