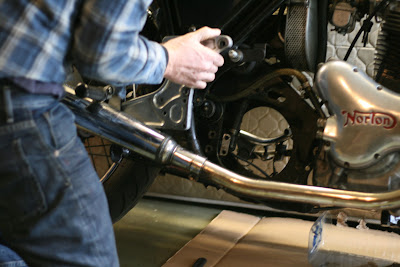 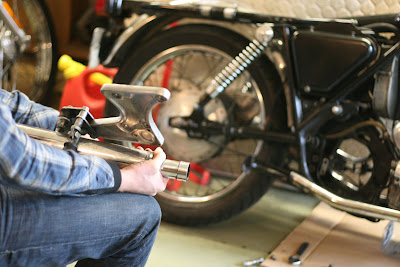 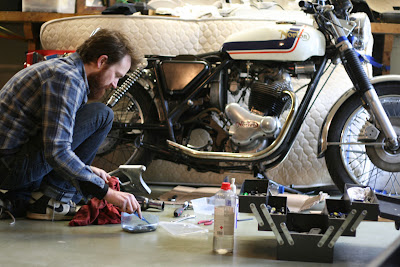 I'm currently waiting on a new gearbox shell from Norvil in the UK. Tried for ages to get one here, found a couple of secondhand ones but they had the same problem as mine. Basically the mainshaft bearing had been spinning in the case and had slogged out the hole. It was pretty bad actually, Alastair said it was the worst he'd seen in a while. Really hoping this is the cause of my problems, but he didn't seem convinced as he thinks it's a layshaft problem only. My thinking is that because the mainshaft was able to move, twist slightly even, in the casing, then it could be putting unusual force on the layshaft and pushing it out ever so slightly so that it would bind of the kickstart shaft. Anyway that's my theory.

Since I'm waiting on the case to arrive I decide to start work on repairing the earthquake damage to this bike (I have it strapped to a work-bench against a mattress now cause these quakes seem to be an ongoing fucking problem). I think all that's wrong is the 'Z plate' that holds the muffler on is bent, so took that off today and will see if John can straighten it (without it breaking) in a press or something.

Hoping to get this shit sorted and get the Norton rolling for the Mods and Rockers run coming up in August?
Posted by Luke Wood at 2:44 AM 1 comment: 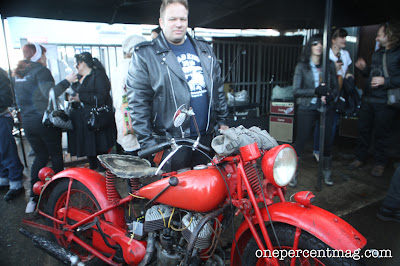 This is my friend Pete and his Indian that's been sitting in his garage for ages. He finally got it roadworthy last weekend and took it to the 'Born Too Late' motorcycle show in Auckland. I can't quite believe this tractor is actually on the road. This bike was in the back of my van when it died going through the Desert Rd. The only reason my van went on the trip was to take this bike... which did nothing but sit around and look good. It never even started. And then it killed my fuckin van! Still great to see it on the road. And nice to see Pete hasn't 'restored' it.

I stole these images from One Percent magazine's blog here. (I gotta get the last couple of issues). Also spotted my good friend and ex-bandmate Andrew Tolley who must have been playing at the show... 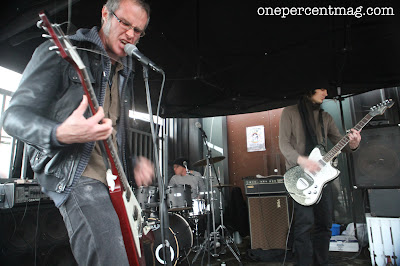 Shit I wish I could have been there. I miss all these good cunts!
Posted by Luke Wood at 1:02 AM No comments:


I'm watching way too much footage of people ripping it up in the desert... I really need to get myself to one. With a motorcycle of course.
Posted by Luke Wood at 2:16 AM No comments:

Email ThisBlogThis!Share to TwitterShare to FacebookShare to Pinterest
Labels: Off road 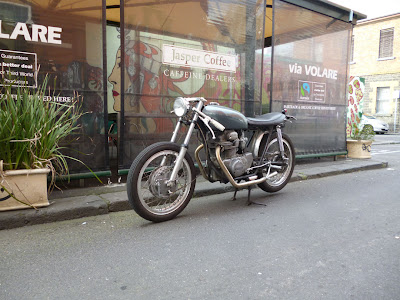 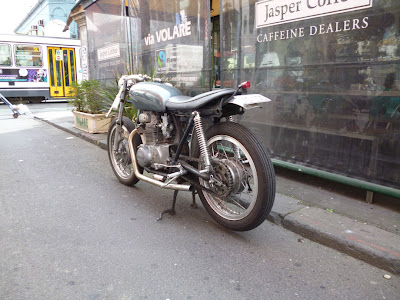 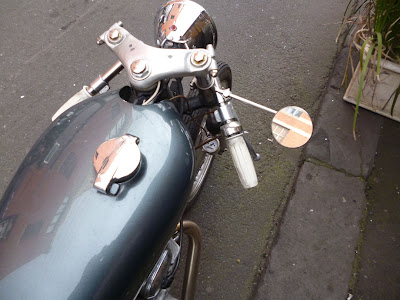 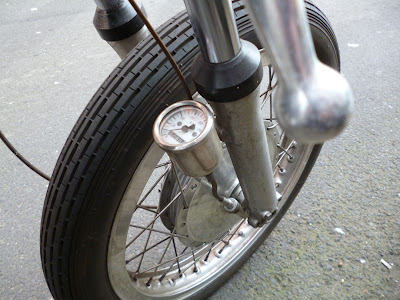 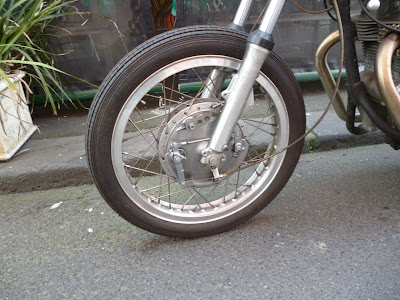 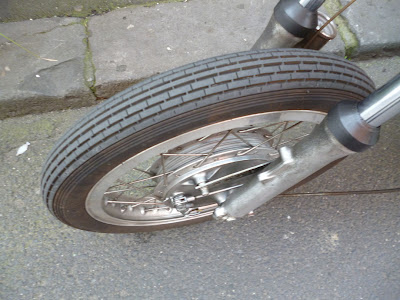 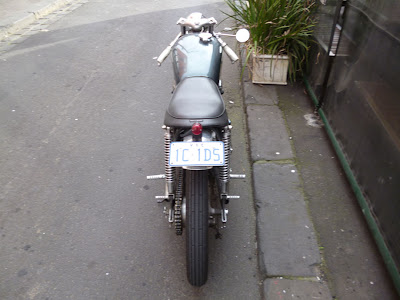 This is Christian Condo's Honda CB 350, the one I mentioned in the previous post. Christian is the owner/operator of the Modern Motor Cycle Company in Melbourne. He's a great chap, and I was lucky to bump into him while he was riding around on our last day there. I heard this bike coming, and thought shit that sounds interesting and then this thing rolled up. I had no idea it was Christian until he pulled over and lifted his visor...

This bike has some amazing details; the speedo attached to the front right-hand-side fork, the incredibly low and swept-back clip-ons, the straight-through pipes, the tail-light... shit you'd never get away with that in NZ!
Posted by Luke Wood at 2:23 PM 1 comment:

Just back from Melbourne where Stuart and I have been plotting HFoS first issue. It was a great trip, a lot of talk, a lot of eating, and a lot of drinking... shit I just couldn't keep up. It was great to see what else Stuart's been doing, some great stuff on his risograph (I shoulda asked for some samples to bring home Stuart?).

I got a bunch of photos of shit I might put on here, but I'll start with these... 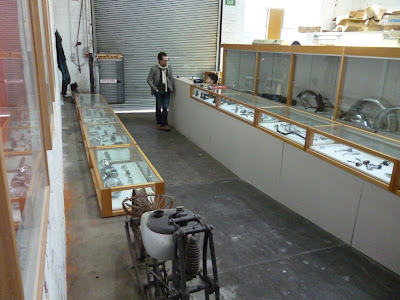 This is the 'Modern Motorcycle Company', run by Christian (whose head you can see behind the counter there) in the same large warehouse space that Stuart's studio and risograph etc are set up in. This is a large space with a bunch of people all sharing the rent and doing interesting shit, it's called 'The Compound Interest' and can be found here. I've mentioned the MMC before on this blog, and I was pretty excited to get to see it and also to meet Christian. Stuart and I had planned to interview Christian on my last day there, but our organisational skills combined with various quantities of beer and whiskey the night before meant that it didn't quite happen. We will sort something out with Christian for this first issue though. Anyway that's the parts department (above), and this is his main workshop area (below)... 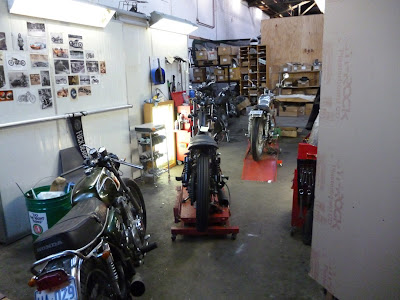 I've already posted photos of Stuart's CB175 that Christian is helping him rebuild, but Stuart has also purchased this 1920-something Triumph single which, until he gets around to it, is on display in the workshop. 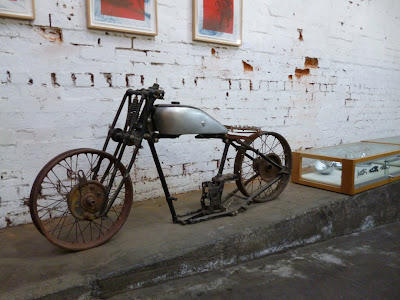 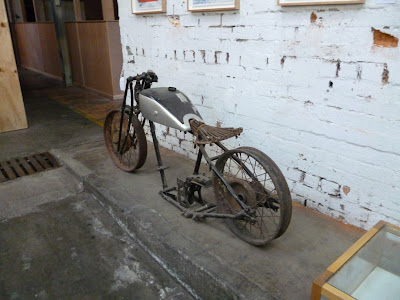 There's also this great old James Captain that Christian is getting fixed-up as a 'daily runner' for someone. What a job!? 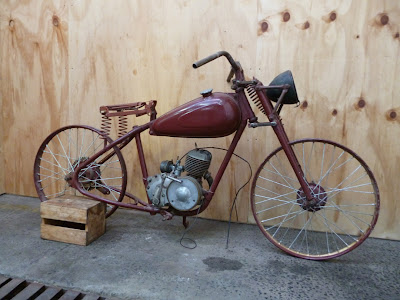 Christian was saying he's super busy, which seems like good news. But maybe he's a bit swamped? I don't know? Hey Christian if you want to employ a pretty crappy apprentice gimme a call yeah? This (below) is the engine out of Stuart's triumph... and some old race leathers Christian had picked up. Man it really was just a shop full of shit I coulda looked at for hours. Christian didn't have his bike there this particular day but i did catch him riding round town later on in the visit – I'll post some pics of his very cool little CB350 cafe job here later on. In the meantime... cheers Stuart, it was a really great visit. And Christian, it was great to meet you man!