Fri 14 Jan, the night before leaving

Spent ages squeezing shit into any small space I could find. Bought some cheap as saddle-bags a couple of days before. Here she is fully loaded and ready to roll... way to excited to sleep! 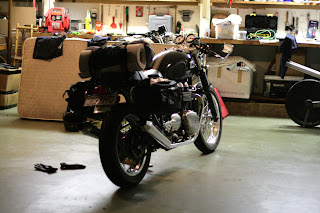 Email ThisBlogThis!Share to TwitterShare to FacebookShare to Pinterest
Labels: Rides

Apology (or I'm a dick, but sometimes it's good to be made to feel like a dick)

I want to apologise for my previous post of a week or so ago. It was ignorant and arrogant and I am now a little embarrassed. Thanks to Max for sparking that little rant and then sending me this link to Rob Giampietro's blog. Turns out Rob is running the Masters in Branding that I previously scoffed at, and Rob is a smart guy. His outline of the curriculum for this programme actually sounds really thoughtful and critical, and is exactly the way I have previously thought 'Branding' couldn't be approached... but of course it could, and I am a dick.

I am humbled. I do however want to point out that I have just been doing some preliminary work for a 'brand' (why is that so icky? I'd prefer to just say identity but the client keeps calling it branding, and he is sort of right, he wants to create a brand that moves far beyond the mark I am making for him)... anyway this project had left a sour taste in my mouth. I haven't done much branding and I should be honest here and just say I don't like doing it. I don't like working on logotypes, identity systems, or branding or whatever you want to call it. I obviously have preferences and prejudices and I let those cloud my previous post... apologies to Mr Giampietro.
Posted by Luke Wood at 2:59 PM No comments:

Masters in branding? Really? I suppose...

Funnily enough I don't really read design blogs. I tried to get into it but I really didn't click with any of them. In fact I'd go further and say they were starting to put me off the idea of ever talking/writing about graphic design ever again. Then yesterday Max sent me a link to an article Rick Poyner has just put on Design Observer... and it was a really interesting piece. Rick talks about graphic design and graphic design history especially, struggling to look like a real academic discipline, and about how the relatively new field of Visual Culture might offer a way forward. Normally I'd be sticking my fingers down my throat at this sort of talk, but I read the whole thing and read it slowly and actually I think Rick has a point. Perhaps more than a point, maybe more of a sort of completely new frame for thinking about graphic design... actually the more I've thought about it, the more I think what Rick's describing is what Dot Dot Dot was actually doing, and maybe then why that publication got such a kind of cult following? I don't know, maybe I need to read it again. Rick's piece I mean.

Anyway so I started thinking, 'hey I really should look at these blogs more often'... and then Max, ever vigilant, sent me another link today. This time to a kind of 'review' of the new (although it's really just 'modified') Starbucks logo on the Under Consideration blog. See it here. This piece by Armin Vit reminds me why I stopped reading about graphic design. Apart from the fact that I despise branding and campaigns like this, Armin simply has nothing interesting to say about it here. It sort of confirms my feeling that there's never very much interesting to say about branding campaigns anyway? It's all generally so bleedingly self-evident that the best idea might be to say nothing?

And then this — the real catalyst for my wanting to post this here today...

A Masters in branding at the SVA in New York. Wow I bet this is going to be a real popular course (that sounds sarcastic but it's not, I'm sure it will be well enrolled). Who's teaching on it I wonder? Steven Heller? Michael Beirut? Graphic design is going nowhere new while these guys are still around. I should do my research before I start these rants, but I'm pretty sure I'm writing to myself here anyway? Aren't I? Anyway, a Masters in branding? Seriously? So we have Rick Poyner making a pretty convincing case around the academic flimsyness of graphic design as a discipline, and yet here we have branding being articulated and thereby kind of embodied as such. Can you imagine the kind of conversations that go on around this? Ok I'm in a rush and I'm not being articulate enough myself here... but I will come back to this I promise. But for now I'm just going to be childish (maybe it's more 'teenage') and stick my fingers down my throat.

I'm really just killing time, waiting for the rain to pass so I can jump on my bike and ride up to Kaikoura where I'm meeting Malcolm. We're leaving for a tour of the South Island this Saturday. Hope the weather can get it's shit together? It's been non-stop sun for about three months and then the day I plan to head off on the bike, R A I N . . . maybe it's karma for my being such an asshole to Steven Heller and Michael Beirut just then?
Posted by Luke Wood at 11:50 AM No comments:

Books vs Water (and something about archives)

Yesterday I visited my mothers to check on my storage unit (a shipping container which she has left on a friend's farm). The last time I went there it smelt a bit damp and I'd been getting worried about my books. Anyway it turns out that one of my worst imaginable nightmares has come true — the container had developed small rust holes in the roof directly above where all my books were stacked (in cardboard boxes). So for about three months now, whenever it has rained, the water has been dripping in on top of the boxes of books. Needless to say I suppose, there is a lot of damage. Thousands of dollars worth! Some are complete throwaways, some are salvageable. I spent lastnight going through them. I should have taken some photos, it was pretty awful, because not only was everything wet but mould had set in in a big way. It's been quite heartbreaking. All my design and art books are the worst affected too. To anyone who doesn't know I have (had!) a fairly hefty collection of these sorts of books, a small library you might say. I use them for teaching and for my own research, but also I'm a bit of a collector (a 'hoarder' Nadine would say) and for many of these books my attachment is sentimental. Similar to how I feel about my record collection, I think of the 'collection' as a sort of map of where I've been over the years. Going through the carnage lastnight I thought more about archives. I've always wanted to archive my own work in a decent sort of way, but I never have (partly because I keep moving). I kept thinking about Julian Dashper's garage/studio. Julian went to America on a Fulbright scholarship (I think?) to research artist's archives. I wondered what became of his research? I wondered what designer's archives are like?
Posted by Luke Wood at 3:13 PM 2 comments: