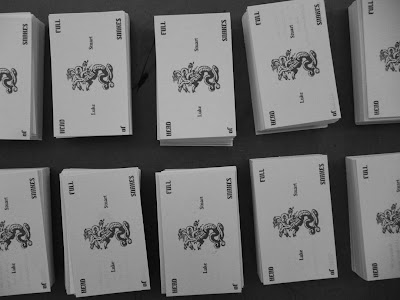 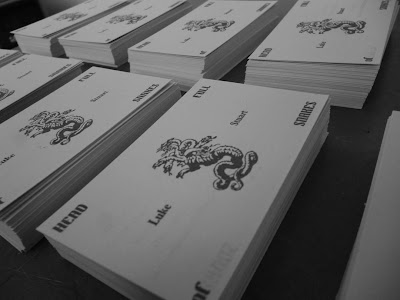 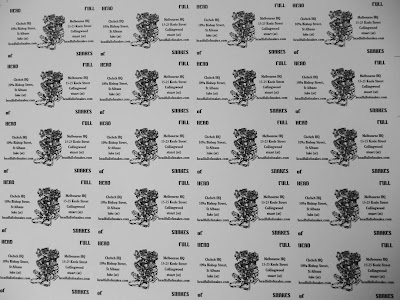 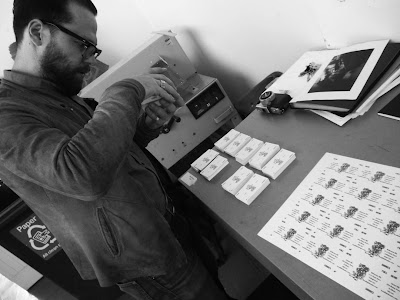 Stuart was here last week and we finally got stuck into things. I had actually organised for Stuart to come over to examine some of my postgrad students, which was great because the uni paid for it, but not so great because the whole first half of the week was taken up with marking etc.

First up we made some business cards on the riso. We were both just really keen to 'make' something tangible... quickly. I think. That was pretty satisfying, and also meant we purchased www.headfullofsnakes.com and got email addresses too. The cards were (obviously enough I guess) based on the 'calling cards' you can see here a couple of posts ago.

We then got busy with the actual mag. We're still waiting for some content, but hopefully it'll all be in this week, and we got a lot of layout sort of stuff done anyway. Stuart doesn't fuck about and procrastinate over every small decision like I do, so having him here really pushed it on a lot! I'm planning to go to Melbourne so we can print the thing together at the end of November. We'll also hopefully do some kind of launch while I'm there. It's good to have a deadline in sight now...

Despite being pretty busy we managed to fit a quick ride in on the Friday night. Went to the Brewery in Woolston and then over to Lyttelton where we couldn't get a table and had to come back to town for food. Stuart rode the Norton and Nadine and I went on the Triumph. Was great to see someone else riding the Norton, to see how it sits on the road etc. It's still running a bit shit, but John's loaned inlet rocker cover seems to have taken care of a good deal of my oil spill!
Posted by Luke Wood at 1:56 PM